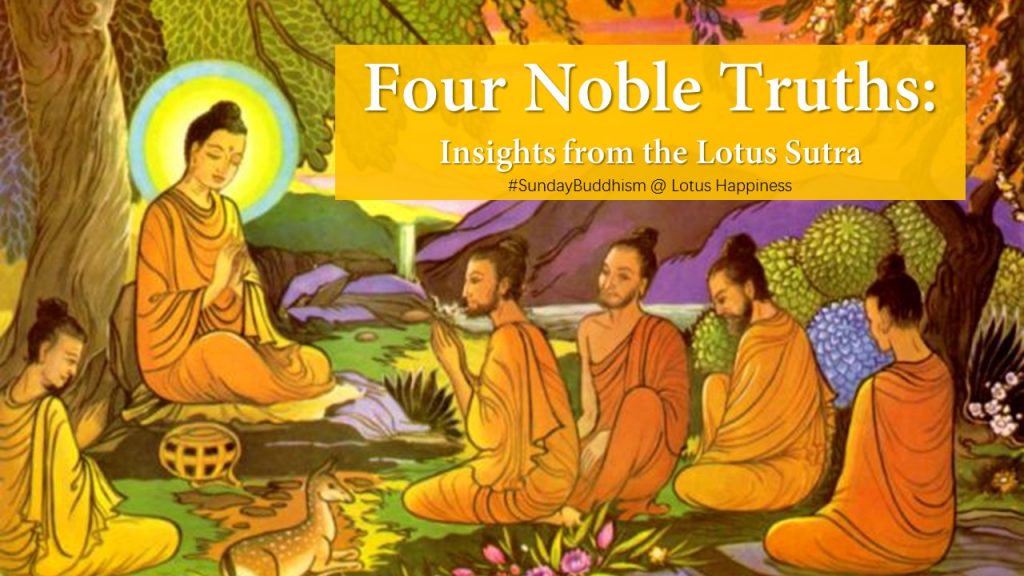 The Buddha, having awakened that extreme asceticism didn’t work, decided to seek the answer from within himself through meditation. At the Deer Park in Sarnath (known as Varanasi at that time) in India, he sat under the Bodhi tree for 49 days before he finally attained Supreme Perfect Enlightenment.

On the 4th day of the 6th month in lunar calendar, the Buddha expounded his first sermon – the Four Noble Truth – to his first five disciples, namely Ājñāta Kauṇḍinya, Bhaddiya, Vappa, Mahanama, and Assaji. The teaching of the Buddha is also known as “Turning the Wheel of the Law”.

In Dhammacakkappavattana Sutta (The Discourse That Sets Turning the Wheel of Truth), the Buddha teaches:

(The Truth of Suffering – Dukkha)

(The Truth of Origin – Samudaya)

Now this, bhikkhus, is the noble truth of the origin of suffering: it is this craving which leads to re-becoming, accompanied by delight and lust, seeking delight here and there; that is, craving for sensual pleasures, craving for becoming, craving for disbecoming.

(The Truth of Cessation – Nirodha)

Now this, bhikkhus, is the noble truth of the cessation of suffering: it is the remainderless fading away and cessation of that same craving, the giving up and relinquishing of it, freedom from it, non-reliance on it.

(The Truth of the Way –Magga)

Now this, bhikkhus, is the noble truth of the way leading to the cessation of suffering: it is this noble eightfold path; that is, right view, right intention, right speech, right action, right livelihood, right effort, right mindfulness, right concentration.

In the Lotus Sutra, the Buddha expounds that all Buddhas in the Universe only teach the One Buddha-Vehicle that is the Law of Supreme Perfect Enlightenment. However, due to the defilements and various attachments of living beings, the Buddha teaches the One Buddha-Vehicle in three different ways: Four Noble Truths for shravakas, Twelve-Linked Chains of Causation for pratyekabuddha, and Six Paramitas for bodhisattvas. This method of teaching is known as The Expedient Methods or The Skillful Means.

“O virtuous men! Once in a remote past, immeasurably boundless and inconceivable asamkhya kalpas ago, there was a Buddha named Sun Moon Lantern Bright Tathagata, Worthy of Worship, Perfect in True Wisdom and Enlightenment, Perfect in Knowledge and Conduct, Well-Liberated, the Omniscient, the Almighty, Master of Living Beings, Teacher of Heavenly Gods and Humans, Buddha-Bhagavat. His discourse was excellent at the beginning, excellent in the middle, and excellent at the end. The meanings were profound in depth and breadth while the words were skillful and wonderful. Pure and spotless, perfectly purified and impeccable, he portrayed the mark of the Brahma practice. For those who sought to become shravakas, he taught the Four Noble Truths so that they could achieve nirvana by overcoming birth, aging, illness, and death. For those who sought to become pratyekabuddhas, he taught the Twelve-Linked Chains of Causation. For the sake of bodhisattvas, he taught the Six Paramitas, leading them to accomplish perfect wisdom so that they could attain Supreme Perfect Enlightenment. (Lotus Sutra 1: 3.3)

Chapter 7: Parable of the Imaginary City

“At that time, after Great Astuteness and Surpassing Wisdom Tathagata had received requests from the Brahma kings in the ten directions and from the sixteen princes, he immediately turned the twelve-spoked Wheel of the Law three times—an action that none of the shramanas, Brahmans, heavenly gods, Maras, Brahmas, nor any other beings in the Universe were able to do. He commenced his first sermon by teaching the Four Noble Truths:

for there are causes for suffering.

However, suffering can be ceased

“O Shariputra! If there are living beings who are inherently wise, having accepted and believed in the Buddha-Bhagavat upon hearing the teaching of the Law, and practice the Way diligently with the desire of quickly liberating themselves from the Threefold World to attain nirvana, these people are practicing the Vehicle of shravaka. They are like the children who want to escape the blazing house in order to get the goat carriages. (Lotus Sutra 3: 4.23) 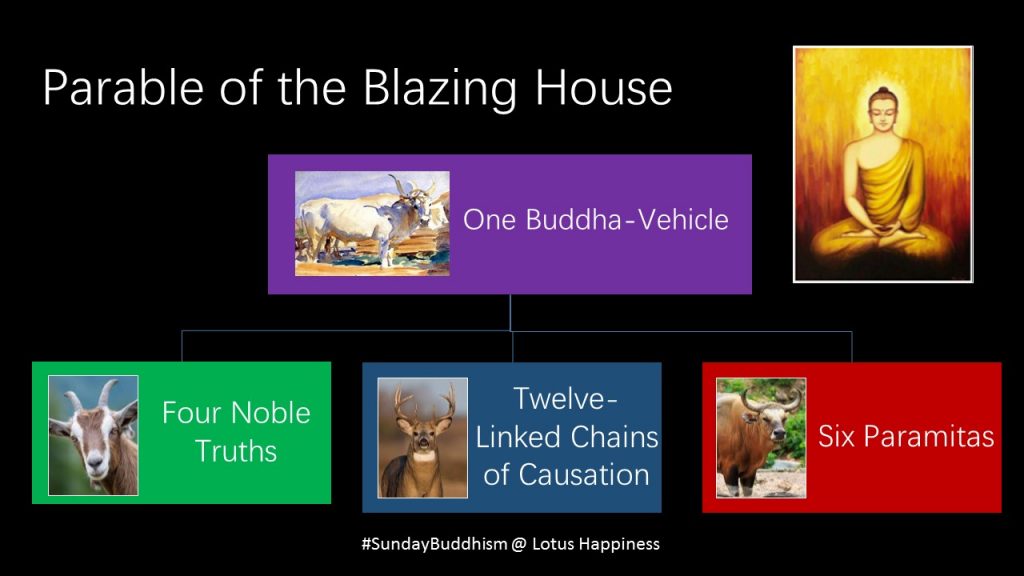 The Seven Parables of the Lotus Sutra are the detailed illustrations of the One Buddha-Vehicle. In the first parable, the Parable of the Blazing House, the Buddha describes how he saves his children trapped in the blazing mansion through the expedient methods. Here is the parable:

A wise and wealthy old man was aware that his dilapidated mansion was ablaze.  His children, however, were trapped inside the blazing house. To save his children, he told them to leave the house but his children were too caught up in their toys to heed his father’s advice.

Hence, the father enticed his children by telling them about the three kinds of toys outside the mansion: goat cart, deer cart, and ox cart. Having heard the unusual toys, his children were excited and they scrambled to leave the blazing mansion. After the children managed to escape, their father gave them the most splendid white ox cart.

The wise old man is the Buddha while the children are his disciples. The blazing mansion is the Threefold World, the goat cart is he Four Noble Truths (for shravaka or voice-hearer), deer cart is Twelve-linked Chains of Causation (for pratyekabuddha or cause-awakened ones), the ox cart is Six Paramitas (for bodhisattvas). Finally, the white ox cart is the One Buddha-Vehicle, the Law of Supreme Perfect Enlightenment, as expounded in Chapter 2: Expedient Methods of the Lotus Sutra.

What is the message of the Parable of the Blazing House?

As you might notice in the parable, after the children have escaped from the blazing house, the Buddha gives them the enormous white ox cart which represents the Law of Supreme Perfect Enlightenment. This means that regardless of which Vehicle you are embracing now, ultimately you will also be able to attain Buddhahood. This is made possible due to the often complex causes, conditions, and webs of personal connections one has cultivated over many lifetimes with immeasurable Buddhas.

Therefore, it is not entirely true for some Buddhist sects to claim that embracing preliminary or provisional teachings are “slanders” or “incorrect”. While the Four Noble Truths is comparatively inferior, it is nevertheless capable of helping one to break the cycle of rebirths in the six lower realms.

If one has the good fortune of hearing, and subsequently embracing the Law of Supreme Perfect Enlightenment as expounded the Lotus Sutra, then this person is assured of complete liberation through the attainment of Buddhahood.

#3 – Eliminating Rebirth is Just a Temporary Solution, Attaining Buddhahood is the Ultimate Way

“The Buddha, knowing the weak and shallow minds of living beings, uses the power of expedient methods to teach two nirvanas so as to provide a resting place along the journey. If living beings continue to dwell in these two stages (i.e., shravakas and pratyekabuddhas), Tathagata will then give this guidance: ‘Your task has not been accomplished. The stage where you are dwelling is close to the Buddha-Wisdom. However, you must observe and perceive that the nirvana you have attained is not the real one. It is only through the expedient methods that Tathagata makes distinction by expounding the One Buddha-Vehicle into three.’ (Lotus Sutra 7: 5.7)

In Parable of the Imaginary City, the Buddha compares the state of Arhat to the illusion of a phantom city – a temporary imaginary city created through the divine powers of the Buddha for people to celebrate, enjoy, and have some rest. This imaginary city is the state of Arhat and escaping from the rebirths of the six lower worlds is just the first and preliminary step along the path to Buddhahood. As such, the Buddha always encourages his disciples to cultivate the aspiration for Buddhahood. By attaining Supreme Perfect Enlightenment, one will be able to achieve complete liberation from sufferings, hence true happiness. Do not rest on your laurels, aspire for Buddhahood which is the real treasure of Tathagata.

Here are the Buddha’s admonishments for people who continue to attach and cling on to Four Noble Truths:

“O Shariputra! If any of my disciples should claim to be arhats or pratyekabuddhas and yet are ignorant to the fact that all Buddhas only teach and transform bodhisattvas, then he is no disciple of mine. He is neither an arhat nor a pratyekabuddha.

“O Shariputra! Moreover, if any of the monks or nuns should claim that they are already arhats dwelling in their final rebirth and imagine themselves attaining final nirvana without having the aspiration to seek Supreme Perfect Enlightenment, then you should know that they are people of excessive arrogance. Why? Because it is impossible for a true arhat not to believe in this Law; unless there is no existing Buddha after the parinirvana of the Buddha. Why do I say so? Because if the Buddha has entered parinirvana, it will be even more difficult to find people who can accept, embrace, read, recite, and understand the meanings of the Law. But if they happen to meet other Buddhas, then they will refresh the determination to attain Supreme Perfect Enlightenment. (Lotus Sutra 2: 4.13-4.14) 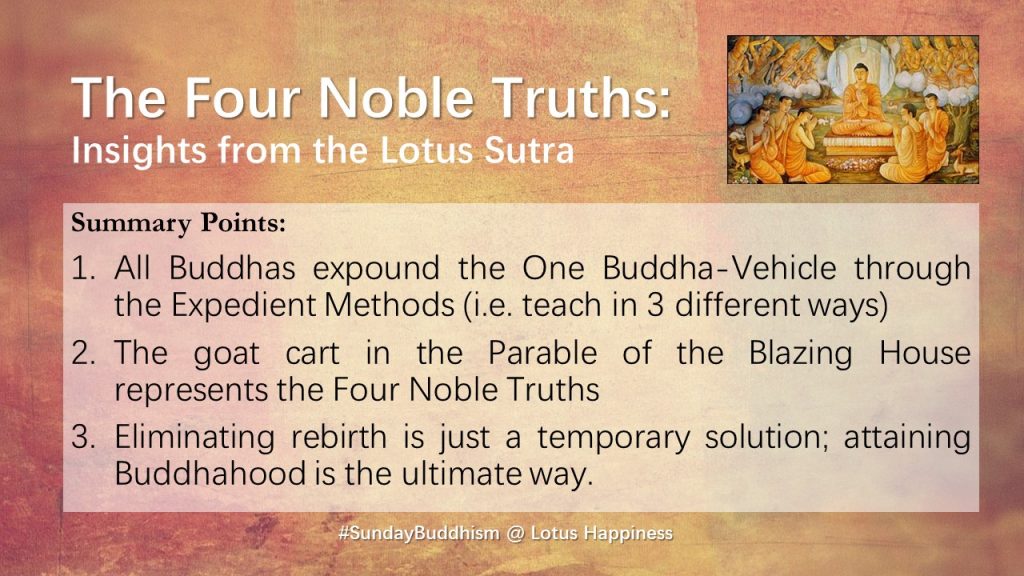 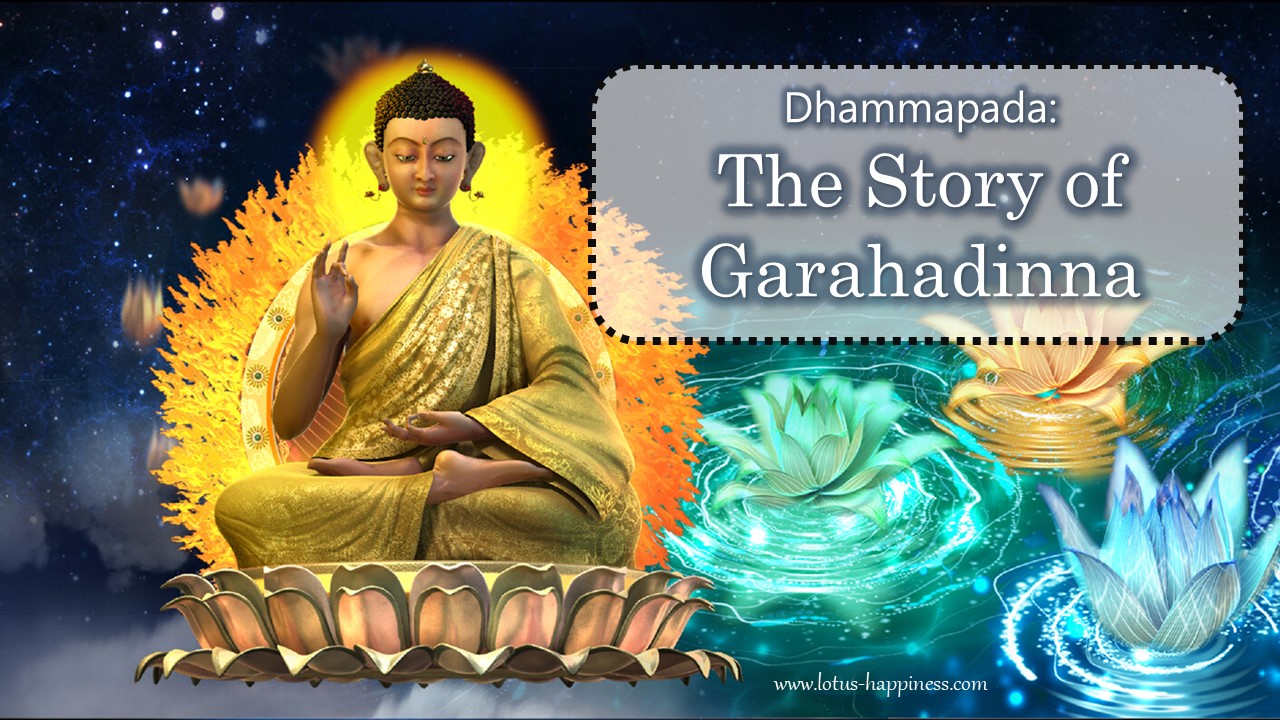 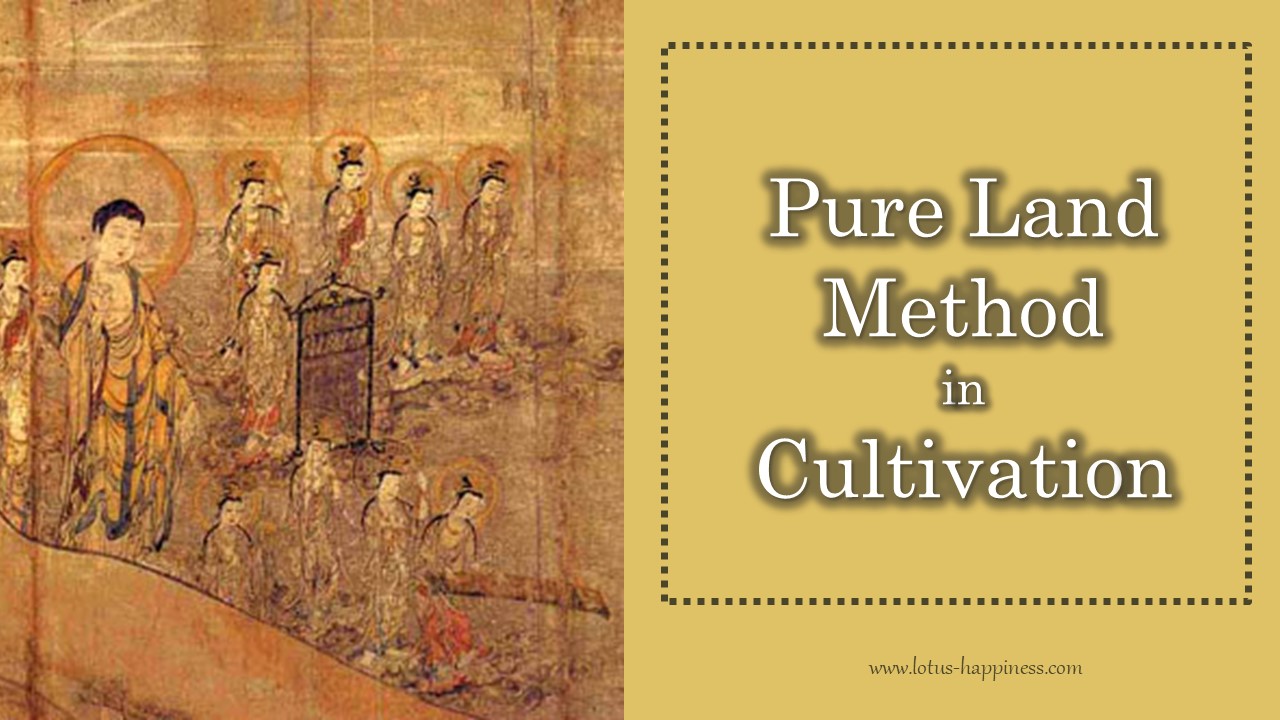 Pure Land Method in Cultivation  A Flexible Method for all Buddhists The Name-Reciting Method of the Pure Land Sect, embracing both the […] 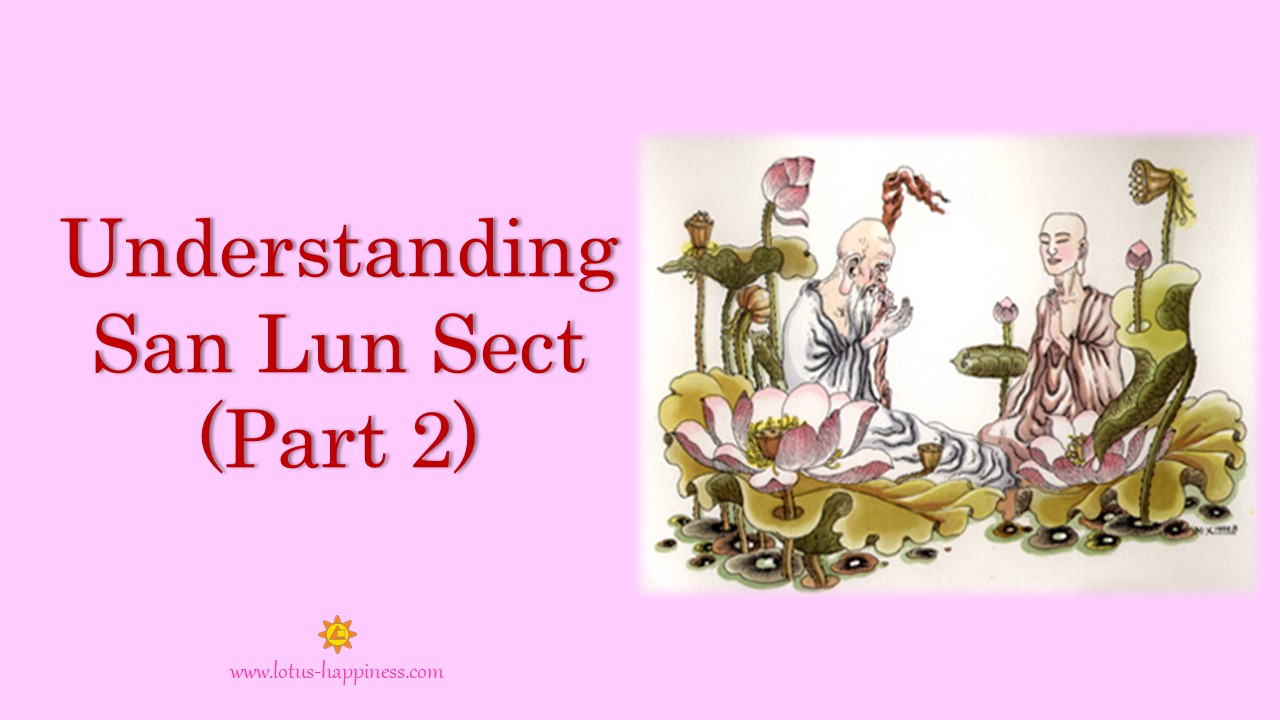 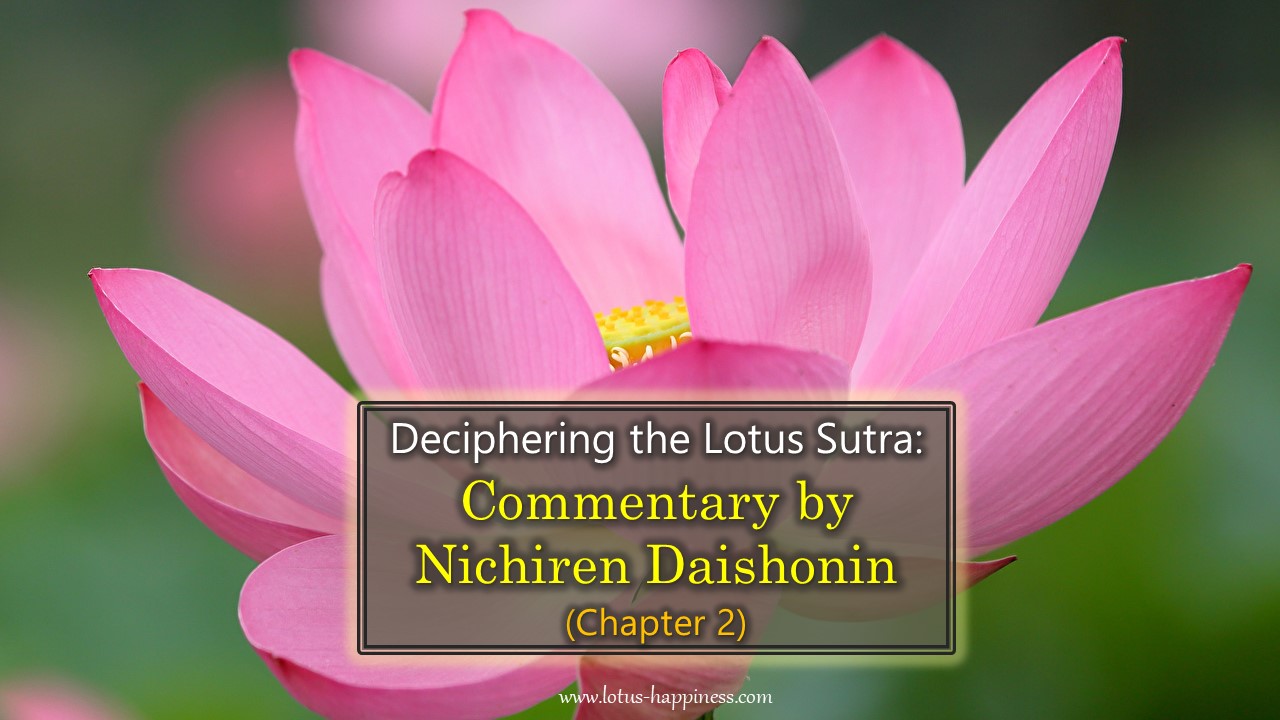