In this introductory chapter we pick up the thread that runs through the entire Lotus Sutra. It is the beginning, or prologue, of an exceedingly long sermon. But even though it is a prologue, its substance is not meager, for it suggests and prepares the way for the great truth about to be revealed.

For the person reading the Lotus Sutra for the first time, it is enough to feel that there is something impressive here, without appreciation of the suggestion and preparation. But for one who studies the sutra over and over and seeks to explain it to others, it becomes important to be aware of this suggestion and preparation and understand its meaning. It will not do to dismiss the chapter simply because it is where we pick up the thread.

Like the preceding Sutra of Innumerable Meanings, the Lotus Sutra opens with a statement of the setting and an enumeration of the principal personages in the multitude assembled to hear the Buddha speak. We are told that, having preached the Sutra of Innumerable Meanings, the Buddha entered a state of deep contemplation, at which the world and the universe itself expressed admiration and joy. The assembled multitude, which included monks and nuns as well as lay believers, Brahman deities, and beings and demons not even human, all placed their hands together in gratitude and gazed upon the Buddha, when suddenly there burst from the circle of white hair between his eyebrows a ray of light. This light illuminated every quarter of this world, all worlds beyond the heavens, and even the depths of the Avici hell of unremitting pain. Even distant future generations showed in the light as though they were real.

This extraordinary event filled the assembly with admiration, but it occurred only to the Bodhisattva Maitreya to wonder what it meant. Finding no answer in himself, he questioned that great one, that repository of wisdom, the Bodhisattva Manjushri. Maitreya’s question is put once in prose, then repeated and elaborated at considerable length in verse.

Manjushri presents a lengthy answer, again first in prose, then in poetry, pointing out that in distant ages past there had been a buddha called Sun Moon Light Tathagata. (Tathagata is the highest epithet of a buddha.) Manjushri explains this buddha’s teaching and proceeds, surprisingly enough, to say that after he was gone another and yet another to the number of twenty thousand buddhas appeared, all bearing the same name, Sun Moon Light Tathagata.

Next, Manjushri tells how the last of them taught the Innumerable Meanings for the benefit of humankind and then entered a state of deep contemplation, whereupon, as had just happened with the present Shakyamuni Buddha, a ray of light sprang from the circle of white hair between his eyebrows and illuminated countless worlds. “When the Buddha Sun Moon Light arose from his contemplation, he preached . . . the Lotus Flower of the Wonderful Law . . . [and] at midnight entered the nirvana of no remains.”

Manjushri concludes that the present tathagata, Shakyamuni, is about to preach the Lotus Flower of the Wonderful Law for the salvation of all people and to make the world just and beautiful. With the poetic version of this the chapter closes.

As may be seen from this synopsis, the Lotus Sutra is in form a kind of drama in which all sorts of surpassingly extraordinary occurrences are treated. We may gather that the intent of the compilers of the sutra was to use familiar symbolic devices and drama to touch the spirits of hearers and to bring them bit by bit to an understanding of the truth set forth by Shakyamuni: a truth so deep that the people of the time could by no means grasp it completely. It is important to understand this.

The presence in the assembly of Brahman deities and even extrahuman demons and gods symbolizes the fact that the teaching of the Buddha is a truth not for humanity alone but for all creatures living and to come. This truth is ultimately one, regardless of the myriad forms that differing causes and conditions impose upon appearances. Accordingly, though religions teaching this truth may differ in form on account of ethnic and cultural differences, insofar as they are true religions they all go back in essence to the same truth. The fact that the deities of other religions assembled to listen to the teaching of the Buddha makes this clear.

The auspicious sign of the shaft of light springing from the brow of the Buddha and illuminating all the worlds of the universe means simply that true wisdom makes clear the true aspect of all things in the world. This wisdom is at the bottom of the Buddha’s teaching, and this is what makes it rational and in no sense counter to the advanced science of our own time.

The fact that the light of this wisdom reaches all worlds of the universe and future generations means that ultimate truth applies not only to earthly matters but also to the entire universe and not merely to the present but to the far distant future as well.

We may sum up the meaning of this auspicious sign by observing that true wisdom goes beyond time and space and makes clear the true aspect of all things. When this is understood, then the meaning of there having been twenty thousand buddhas Sun Moon Light in succession, all of whom preached the one Law, also becomes apparent. For if the truth be one, then all who have awakened to it will teach what at bottom is one and the same.

Shakyamuni, the historical Buddha, though he attained enlightenment through his own contemplation, claimed no originality for his teaching. He stated straightforwardly that “of yore I followed countless buddhas.” This declaration stems not from modesty but from his conviction that the truth is always one. 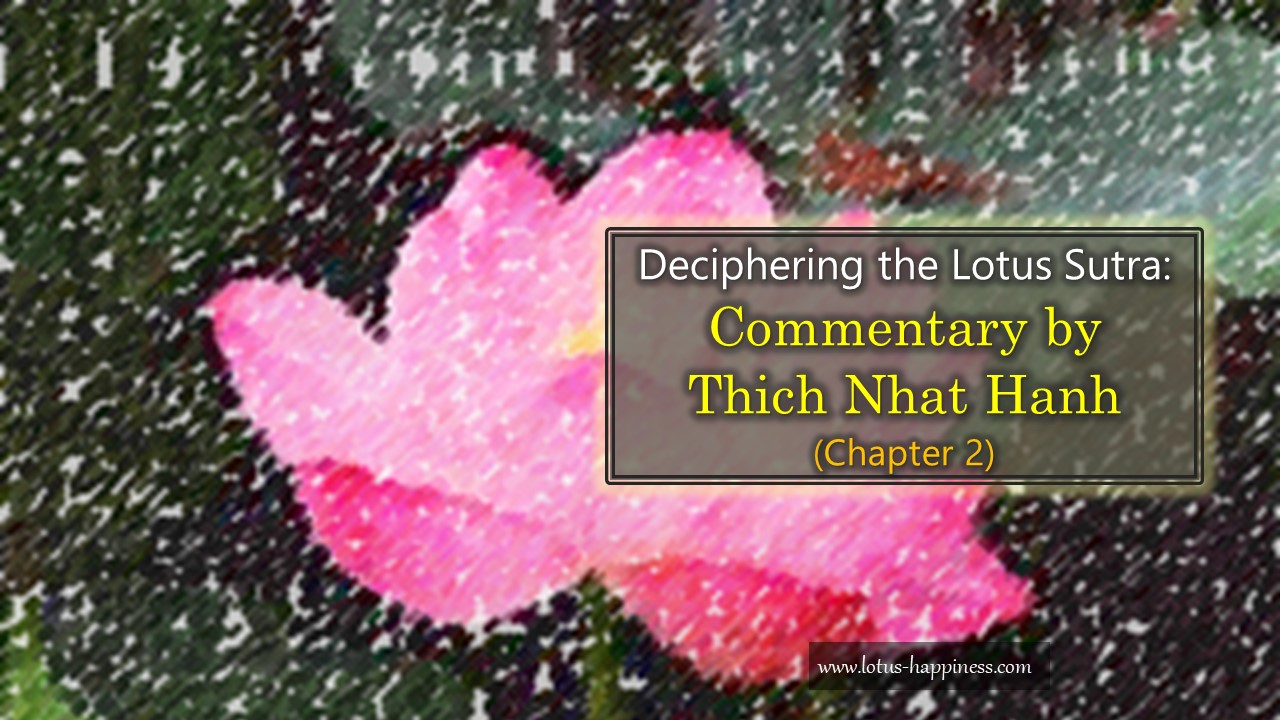 Deciphering the Lotus Sutra: Commentary by Thich Nhat Hanh (Chapter 2)   #1 Whatever eyes you use to look at the Buddha, […] 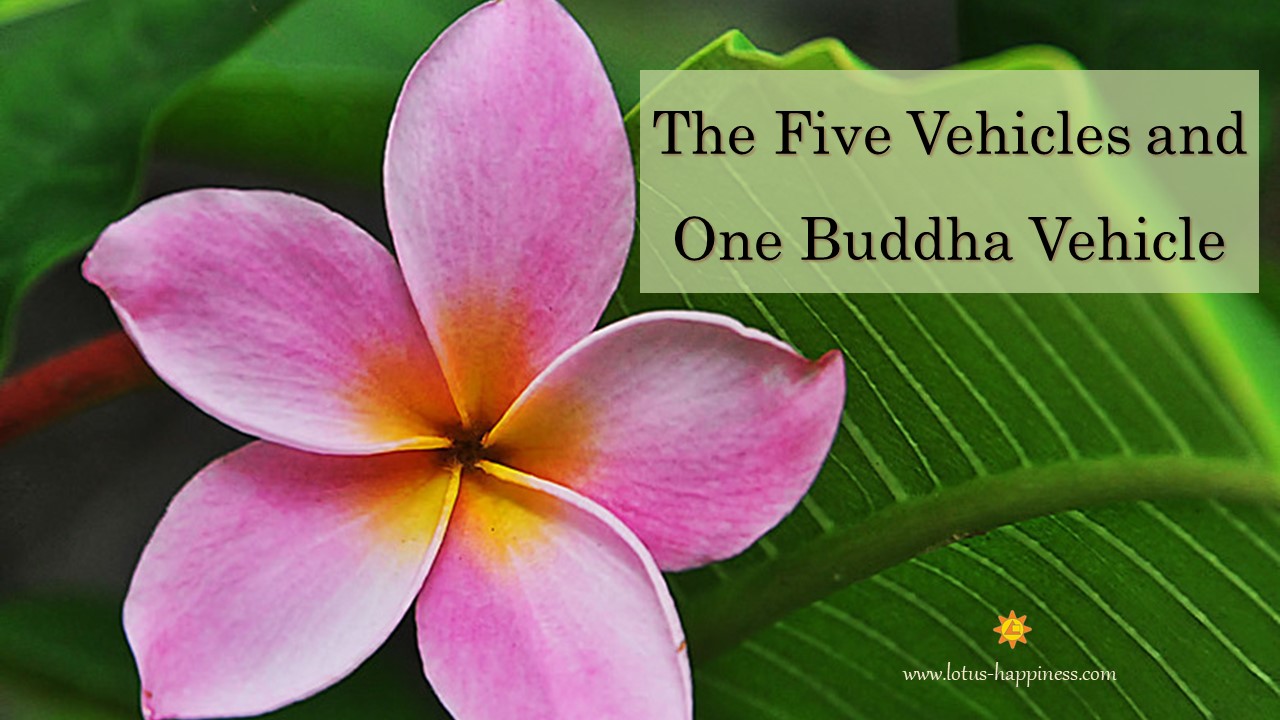 The Five Vehicles and One Buddha-Vehicle People vary in their background, interests, levels of understanding, sharpness in mind, and objectives in studying […]