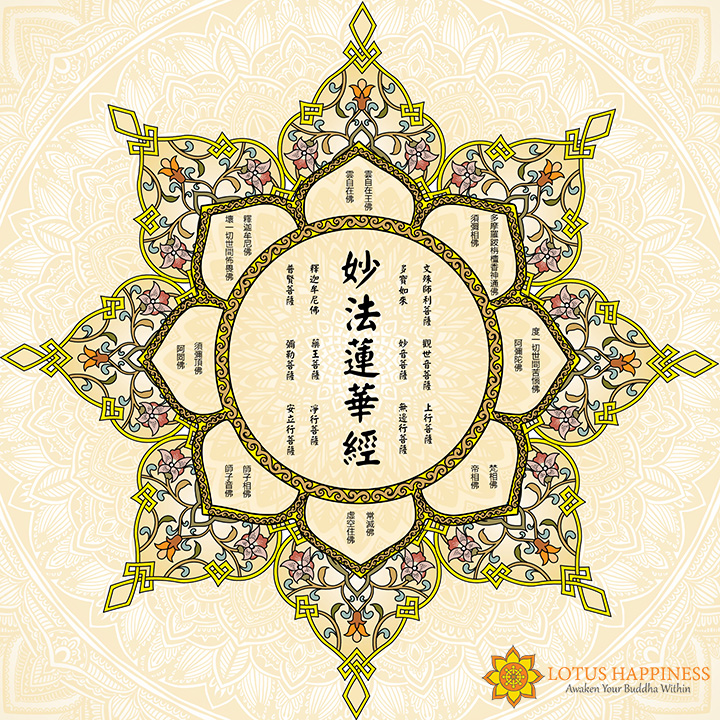 Inspirations Behind the Mandala of the Lotus Sutra

I always believe that the mandala of the Lotus Sutra should focus purely only upon the realm of Buddhahood. This means that only Buddhas and bodhisattvas are included in the mandala. Non-Buddhahood related beings, be they good or bad, should not be included at all. The reason is simple: what we pay attention every day in our daily ritual becomes who we are. A mandala is a sacred object that works like a mirror. If we focus upon Buddhahood, we become a Buddha. If we focus upon all kinds of beings in the Ten Worlds, we will unconsciously be distracted and adulterated which, in turn, will become a stumbling block in our journey of attaining Buddhahood. Thus, it is critical that we focus on the Law of Buddhahood as our core Dharma practice.

Prayer, chanting and meditation are sacred rituals to cultivate our minds. By constantly be mindful of Buddhahood within the depths of our lives, we will achieve single-pointed concentration (samadhi) to awaken, polish, and illuminate our inner worlds of Buddhahood.

You may practice the Lotus Sutra based on the concise Liturgy of the Lotus Happiness Dharma Sanctuary.

#1: Only Buddhas and Bodhisattvas found in the Lotus Sutra

Influenced by Zhiyi’s philosophy of Ichinen Sanzen (mutual possession of the Ten Worlds) as well as the Japanese culture of Shintoism, Nichiren included a full spectrum of beings in the Gohonzon.

#2: No Shinto, Hindu, or wrathful gods and deities

While many of the heavenly gods or wrathful deities are benevolent beings who are known to protect the Dharma and the practitioners of the Lotus Sutra, the Buddha has not given instructions for his disciple to worship them. As such, all types of non-Buddhahood beings such as local Japanese deities, Hindu gods, wrathful Dharma protectors or beings are excluded.

In fact, Shakyamuni Buddha had expressly instructed his disciples to pay homage to Bodhisattva Avalokitesvara, but this bodhisattva that personifies compassion is prominently absent in the Gohonzon.

#3: Focus on the Dharma, not the Person

Focusing on the Dharma, rather than any person, is the most reliable way of practicing Buddhism. In Mahayana Mahaparinirvana Sutra, the Buddha taught his disciples to “follow the teachings, not men; the meaning, not the word; true wisdom, not shallow understanding.”

Hence, consistent with the Buddha’s teachings of focusing on the Dharma instead of any person, the names of all Buddha’s disciples and Buddhist masters such as Nichiren, high priests of Nikko-lineages, Zhiyi, Miao-lo, Dengyo, Shariputra, Mahakashyapa are excluded.

Inspiration #2: Eight Petals
In Chapter 7, Shakyamuni Buddha revealed his past rebirth as the youngest of the sixteen sons of Great Astuteness and Surpassing Wisdom Buddha.11 Shakyamuni Buddha and his fifteen brothers had already attained Buddhahood in the remote past.
The eight petals of the lotus flower wonderfully depict the sixteen princes who were already Buddhas in the eight directions. These fifteen Buddhas share an intimate connection with Shakyamuni Buddha because they are his brothers. The presence of these Buddhas is significant for a number of reasons. First, they are concrete examples of Shakyamuni Buddha’s attainment of Buddhahood eons ago. This is consistent with his revelation of eternal lifespan and his attainment of Buddhahood in the remote past in Chapter 16. Second, it reveals that Shakyamuni Buddha is not the only Buddha because Buddhas are everywhere in the Universe:

Similar to Nichiren Gohonzon, two Buddhas—Shakyamuni Buddha and Abundant Treasures Buddha—are present on both sides of the Chinese character of the Lotus Sutra, Miao Fa Lian Hua Jing (妙法莲华经).
This depiction is an inspiration from Chapter 11 in which a seven-jewelled treasure pagoda emerged from the earth and suspended in mid-air. Inside the pagoda was the Abundant Treasures Tathagata who had long ago entered parinirvana, and Shakyamuni Buddha who was invited by Abundant Treasures Tathagata to join him. The five Chinese characters of the Lotus Sutra represent the Treasure Pagoda.

Inspiration #4: Bodhisattva Manjushri
‘O Maitreya! You should know that Bodhisattva Splendid Light who lived at that time was none other than I myself while Bodhisattva Seeker of Fame was you. Now when I witness this auspicious sign, it is no different from what I had seen before. I surmise that today Tathagata is going to expound the Great Vehicle sutra known as The Lotus Sutra—the Law to guide bodhisattvas, the Law protected and mindfully guarded by Buddhas’ (LS 1: 3.14).

Inspiration #5: Bodhisattva Universal Worthy
Thereafter, Shakyamuni Buddha extolled him, saying: ‘Excellent, excellent! O Universal Worthy! Because you are able to shield and support the Lotus Sutra for the peace, joy, and benefit of all living beings, you have already accomplished extraordinary merits and displayed profound compassion. Since the remote past, you have already awakened a desire to attain Supreme Perfect Enlightenment and have taken a vow to use your divine powers to guard and protect the Lotus Sutra. I will use my divine powers to guard and shield those who are able to accept and embrace the name of Bodhisattva Universal Worthy’ (LS 28: 2.1).

Bodhisattva Universal Worthy (Skt. Samantabadra) is an eminent bodhisattva in the Mahayana tradition. In Chinese Buddhism, he is the Trinity of Shakyamuni Buddha and also one of the Four Great Bodhisattvas. In Nyingma school of Tibetan Buddhism, he is regarded as the Adi-Buddha (i.e. First Buddha or Primordial Buddha) who is presented in indivisible Yab-Yum (Buddhist symbol) with his consort Samantabhadri as a way to depict primordial union of wisdom and compassion.
In Avatamsaka Sutra, he guided Sudhana to follow Bodhisattva Avalokitesvara in the practice of achieving enlightenment. Moreover, he is well-known to have made ten vows to achieve Buddhahood:12
1. To pay homage and respect to all Buddhas
2. To praise the Tathagata
3. To offer abundant offerings generously
4. To repent misdeeds and evil karmas
5. To rejoice in others’ merits and virtues
6. To request the Buddhas to continue teaching
7. To request the Buddhas to remain in the world
8. To follow the teachings of the Buddhas at all times
9. To accommodate and benefit all living beings
10. To transfer all merits and virtues to benefit all beings
In Chapter 28 of the Lotus Sutra, Bodhisattva Universal Worthy joined the congregation just before Shakyamuni Buddha wrapped up his teaching. He came to offer encouragement, support, and protection to the practitioners of the Lotus Sutra. He also gave assurance to Shakyamuni Buddha with respect to widespread propagation of the Lotus Sutra in the Saha world.
The closing sutra of the Lotus Sutra—The Sutra of Meditation on Bodhisattva Universal Worthy—is essentially a teaching of meditation upon emptiness as a way of purifying all past negative karma for the purpose of attaining Buddhahood quickly.

He will be the next Buddha
with the name Maitreya,
who will broadly save all living beings
in numbers beyond measure. (LS 1: 4.36)

The Buddha spoke to Bodhisattva Flower King of Constellation: “Who do you think Bodhisattva Joyfully Seen by All Living Beings was? He was none other than the present Bodhisattva Medicine King! His offerings of self-sacrifice amount to immeasurable hundreds of thousands of millions of billions of nayuta of numbers (LS 23: 2.1).

O Splendid Virtue! Bodhisattva Wonderful Music is able to save and protect various living beings in the Saha world. Bodhisattva Wonderful Music transforms and manifests himself in different forms so as to expound the Lotus Sutra for all living beings in the Saha world. Yet his divine powers, his transformations, and his wisdom will never be undermined or deteriorated (LS 24: 2.6).

Bodhisattva Wonderful Music practiced the Dharma by giving music as an offering to King of Thunderous Sound in the Clouds Buddha. This bodhisattva saved people in the Saha world through his divine powers by skillfully transforming into various physical forms to lead people to enlightenment.
This bodhisattva is special because he does not dwell in the Saha world and his name is not mentioned is any of the Mahayana sutras except the Lotus Sutra.

Inspiration #10: Four Bodhisattvas of the Earth

Number Reference to the Mandala of the Lotus Sutra 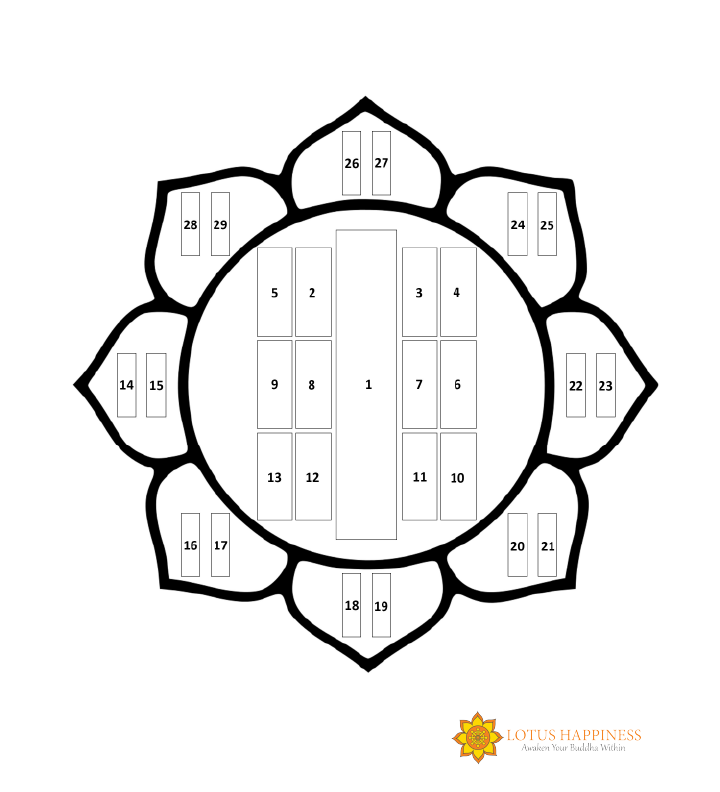 Why Buy from Us?

1. We engage the finest canvas printing company that produces museum and art-gallery exceptionally superior quality canvas printing that could last for at least 75 years.

2. Every mandala is unique and special. We can personalize your mandala by inserting your name or the name of your loved ones at the bottom right-hand corner of the mandala.

3. This beautiful mandala of Lotus Sutra is a divine inspiration for your personal prayer, chanting, and meditation so as to help you achieve holistic physical cleansing and spiritual healing toward enlightenment.

Please visit Etsy for more information about the purchase of the mandala.

There is no ready stock available as the printing of the mandala is based on-demand. The lead time for the canvas printing is about 3-5 business days.