In Chapter 20 of the Lotus Sutra, the Buddha relates his past life experience as Bodhisattva Never Disrespectful without being asked by any of his disciples. This is significant because usually the Buddha teaches according to questions and requests of his disciples, as opposed to teaching the Law on his own accord.

Let us understand the background and history of Bodhisattva Never Disrespectful in his bodhisattva practice.

Bodhisattva Never Disrespectful was the past life of Shakyamuni Buddha during the era of King of Majestic Voices Buddha.  Rather than utilizing his time reciting the sutras, Bodhisattva Never Disrespectful enjoyed meeting people and showing them utmost respect by bowing to them and said: “‘I have deep reverence for you and I will never treat you with disrespect, contempt, or arrogance. Why? Because all of you are practicing the bodhisattva way and will surely become Buddhas!’

Herein lies the reason for his name – Never Disrespectful. He practiced respecting all people for who they are.

Some unkind people who did not like to hear about the “prophecy” of Bodhisattva Never Disrespectful responded by rebuking and physically assaulting him. Instead of harbouring resentment, grudge or anger, Bodhisattva Never Disrespectful continued to bow and give praise to them. As a result of his constant spirit of reverence, he received the teaching of the Lotus Sutra from King of Majestic Voices Buddha when he was about to pass away. With the Lotus Sutra, his six senses were purified and cleansed, hence enabling him to expound the Lotus Sutra far and wide.

People who previously taunted him with disdain perceived a change in him; they noticed he had gained divine powers to joyfully and persuasively expound the Law. As such, these people became his followers. Bodhisattva Never Disrespectful was able to guide billions of people towards the path of Buddhahood within a short period of time.

After he passed on, he was reborn in the midst of innumerable Buddhas and continued to preach the Lotus Sutra.

Those people who previously treated Bodhisattva Never Disrespectful contemptuously were reborn in the realm of intense suffering for a thousand kalpa without ever having the opportunity to encounter a Buddha. They were unable to meet a Buddha, nor did they be able to hear the Buddha-Law for billions of kalpas.

Nonetheless, the compassion of a Buddha knows no bound. These people were subsequently reborn in the midst of Shakyamuni Buddha who guided them towards Supreme Perfect Enlightenment.

Here are the 5 Lessons Learnt from Bodhisattva Never Disrespectful:

In spite of the prevalence of mindfulness meditation in Western Buddhism, the most common Buddhist meditation over many centuries is chanting and recitation of Buddhist texts and sutras. The purpose of meditation is the cultivation of the mind through meditating upon the Buddha-words in the sutras.

What if a person does not have a soft spot in chanting, meditating or reading of sutras? Fret not, the way to Buddhahood is not confined to recitation of sutras, and the experience of Bodhisattva Never Disrespectful is a testament to this truth.

Bodhisattva Never Disrespectful attains Buddhahood by meeting people,  as well as praising and validating the innate Buddhahood in others. This very act sows the seed of Supreme Perfect Enlightenment in them, hence awakening their Buddha-Nature within.

Two outstanding qualities of Shakyamuni Buddha are diligence (LS 9: 2.2) and endurance (Chapter 20). Diligence and endurance are two of the Six Paramitas required to be cultivated by bodhisattva towards attaining Buddhahood.

While justice and righteousness are highly-regarded by some modern Buddhist organizations, the value of endurance is even more praiseworthy and noble. Endurace, patience and perseverance are reflections of the state of inner peace and equanimity, rooted in mindful awareness at the present moment.

Rather than letting anger, resentment and hatred get the better of him, he chose to understand people and circumstances with the eyes of compassion and kindness.

The importance of personal relationship and connection cannot be overly emphasized. Here comes the power of Buddhism: one does not even need to embrace Buddhism in order to attain Buddhahood. Relationship matters and that’s one of the reasons why the Law is called Magnificent Law of Lotus (妙法莲华). The Chinese word “Lian” (莲) ( meaning Lotus) is homophonically identical to the word “Lian” 连 ( meaning connecting together).

One of the methods of Buddhahood is the dynamic personal relationships we form with others – our parents, siblings, relatives, friends, spouse, children, bosses, subordinates etc. By embracing Buddhism, we are creating a mystical cause with the people around us towards Buddhahood in the remote future. How marvellous! How splendid!

Bodhisattva Never Disrespectful did just that – establishing relationship and recognizing the Buddhahood in people – which ultimately planted the Buddha’s seeds in every acquaintance and encounter he met. These people are always reborn with him and they are eventually led to the path of Buddhahood.

Simply put, do not underestimate the power of personal connection and relationship towards Buddhahood.

In the story of Bodhisattva Never Disrespectful, we realize that the Law of Cause and Effect remains valid and relevant because consequences of all actions, both good and evil, will be manifested as results in any lifetimes.

Much as the Law of Causality inevitable and strict, it is only temporary. Once all the unwholesome karma have been cleansed and eradicated, these people will be reborn in favourable realms and they will have the opportunity to encounter the Buddha’s teachings.

The positive aspect of Buddhism is that there is no eternal damnation, even for those who humiliate, insult and disparage the practitioners of Buddhism.

“O Gainer of Great Authority! As for the four groups at that time—monks, nuns, lay male disciples, and lay female disciples—because of their anger and their sins of treating me with contempt and disparagement, they were not able to encounter a Buddha, nor did they hear the Law or meet the community of monks for twenty billion kalpas. For a thousand kalpas, they went through great suffering in the Avichi hell. As soon as they had finished purifying their offenses, they were able to meet Bodhisattva Never Disrespectful, who led them in attaining Supreme Perfect Enlightenment.  (LS 20: 1.16)

“O Gainer of Great Authority! Who do you think were these four groups of people who always treated the bodhisattva with contempt and despise at that time? All of them are now in this assembly—Bhadrapala and his group of five hundred bodhisattvas as well as Lion Moon and her group of five hundred nuns. All of them will never backslide in their path of attaining Supreme Perfect Enlightenment. (LS 20: 1.17)

Shakyamuni Buddha declared that had it not been for his practice of the Lotus Sutra, he would not have been able to attain Buddhahood so quickly. The excerpt in the Lotus Sutra 20:1.15 is a testament that the Lotus Sutra is indeed the teaching that leads to swift attainment of Supreme Perfect Enlightenment.

“O Gainer of Great Authority! Who do you think this Bodhisattva Never Disrespectful was at that time? This person is none other than I myself! In my previous lifetime, had I not accepted, embraced, read, recited, and expounded the Lotus Sutra for others, I would never have been able to attain Supreme Perfect Enlightenment so quickly. Because I was able to accept, embrace, read, recite, and expound the Lotus Sutra for others in the presence of the former Buddhas, I was able to quickly attain Supreme Perfect Enlightenment.” (LS 20: 1.15)

What is the difference between practising the Lotus Sutra and the rest of all sutras?

As opposed to the teaching by some Nichiren schools that practising all other sutras is an act of “slander”, and practising the Lotus Sutra is the only “True Buddhism”, the reality is that all sutras will ultimately lead to the shore of enlightenment. The only difference is Speed. 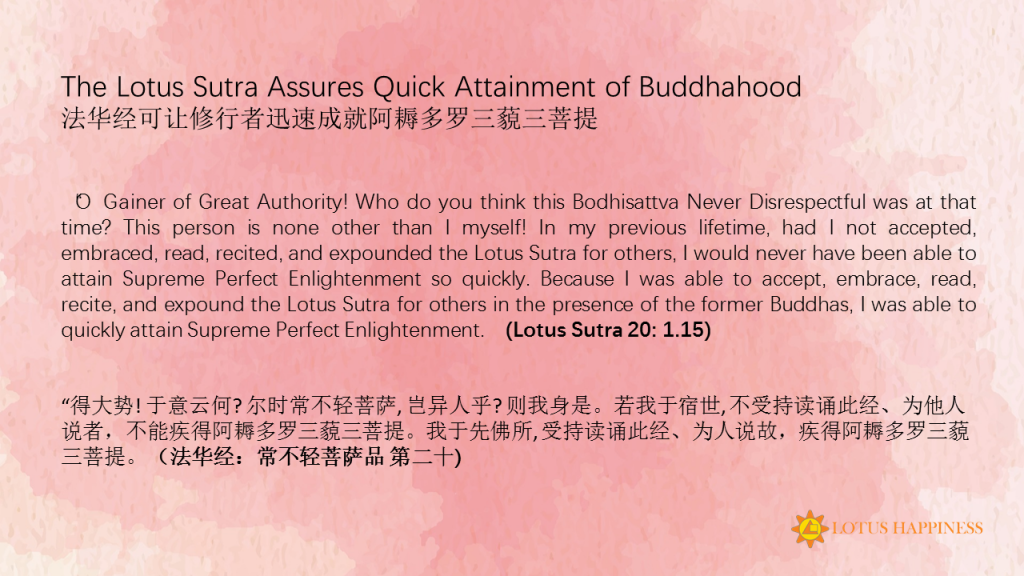 Here is the summary for today: 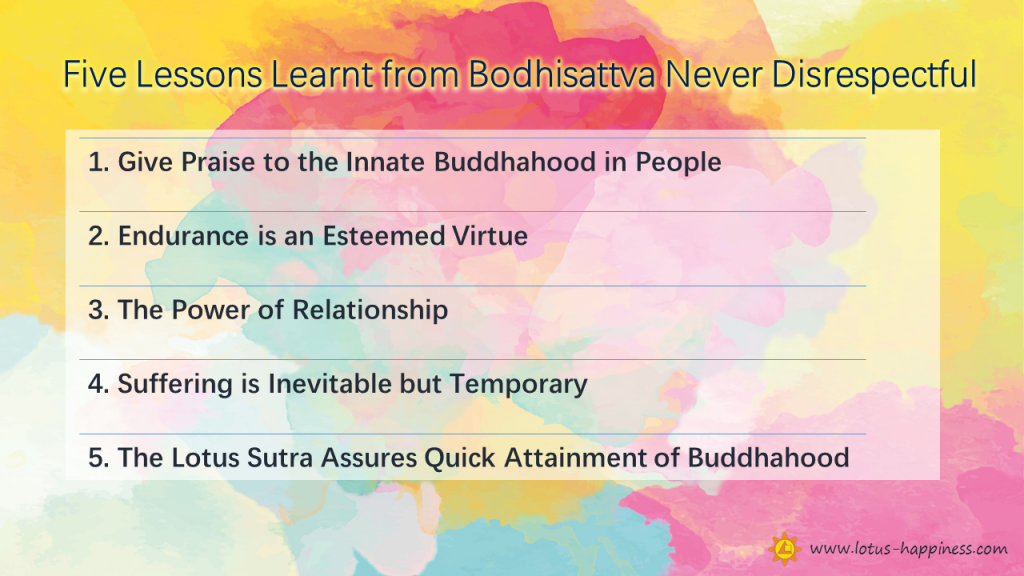 The topic for Next Sunday is Ten Worlds or Ten Spiritual Realms of Life.

Here are ways to be updated of the latest posts:

May you be peaceful, happy and healthy! 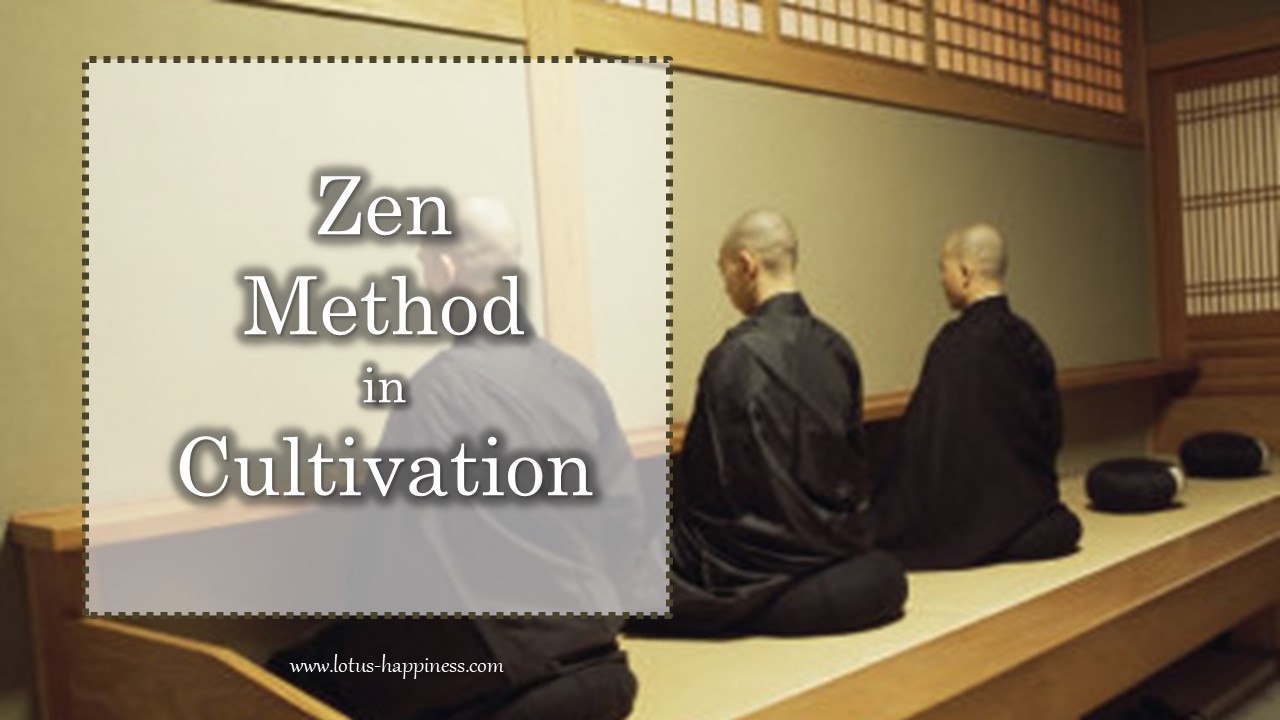 Zen Practice in Cultivation  What is Ch’an (Zen) Ch’an Buddhism is the core of Buddhism. Once, after a sermon, Gautama Buddha (Shakyamuni) […] 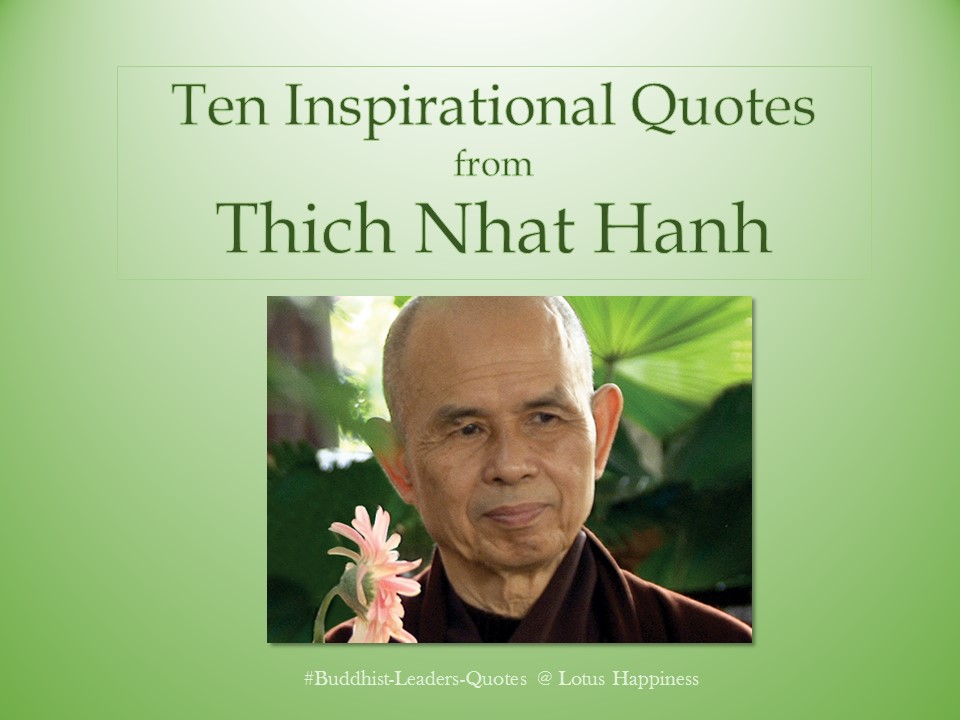 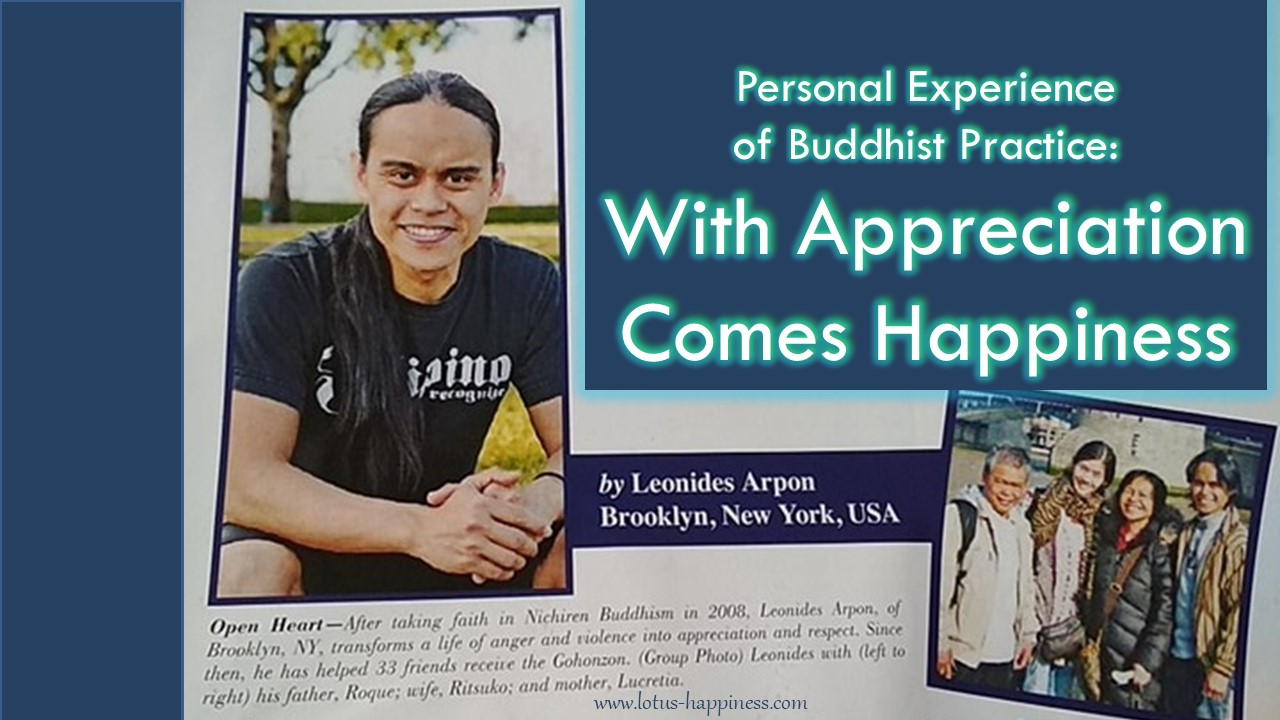 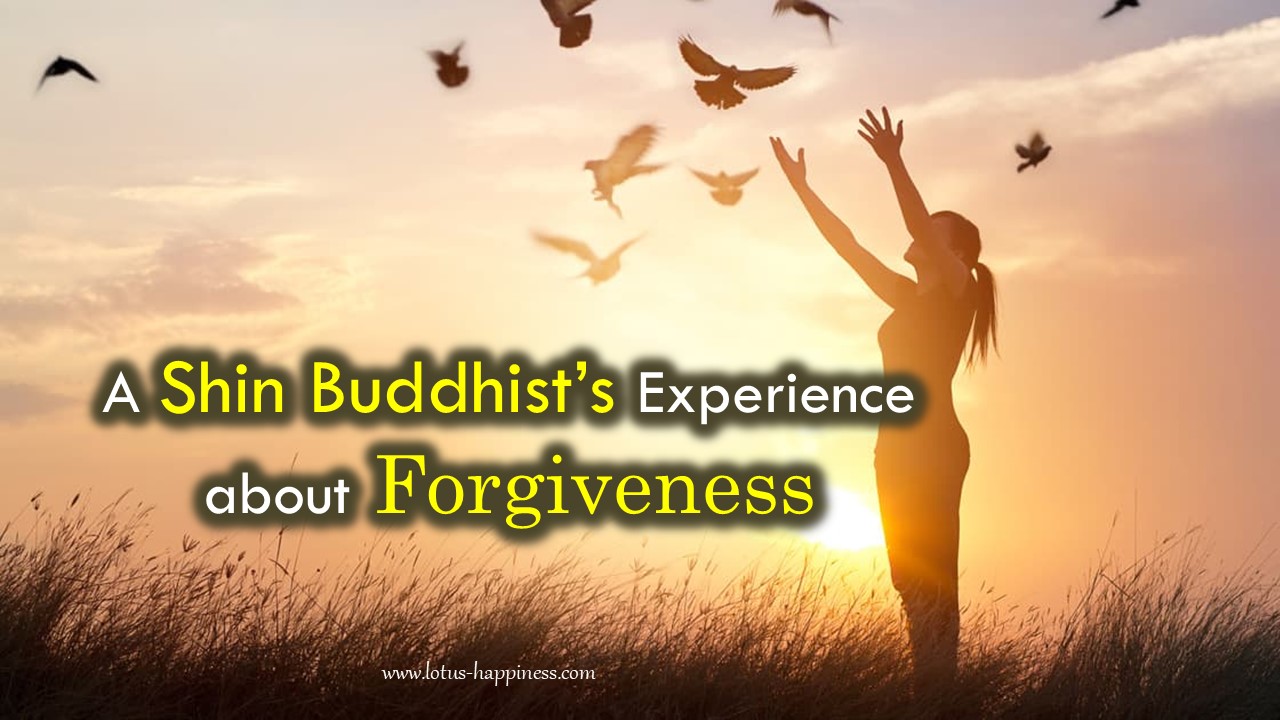