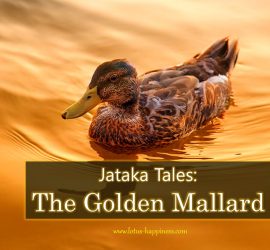 Jataka Tales: The Golden Mallard Once upon a time when Brahmadatta was reigning in Benares, the Bodhisatta was born a Brahmin, and growing up was married to a bride of his own rank, who bore him three daughters named Nanda, Nanda-vati, and Sundari-nanda. The Bodhisatta dying, they were taken in […]